Here at the Wool Legion we have a  large venue which enables us to have a skittle alley inside the main bar area, so unlike other venues you feel part of the atmosphere of the bar.

We support two teams for the DORCHESTER LEAGUE who play here every Friday night during the season. 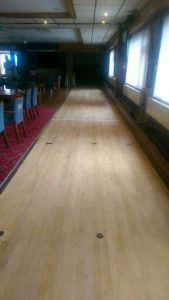 Five dart boards within the club offer our local teams plenty of practice, we also support two teams from the WAREHAM DISTRICT LEAGUE.

Crib is played here as not only a way to pass time over a beer or two but also at league level for BERE REGIS AND DISTRICT LEAGUE.

We also have skittles games on most nights of the week running a summer and winter in house league which is very popular.

New members always very welcome here at Wool Legion if you would like more information on joining, our membership secretary is always here for a chat Pete Saunders or log on to www.britishlegion.org.uk and see the link JOIN THE LEGION.